Words can be instruments of violence and can be as deadly as a machete, a gun or a bomb.

As Sri Lanka reels from the Easter Sunday bombings, its leaders dispute apparent intelligence failure, assign blame and respond to the violence. The decision to block most social media after the attacks may have been motivated by security concerns, but left a vacuum of information, fueling confusion and giving little reassurance to a population that hoped to have left daily terror in its history. 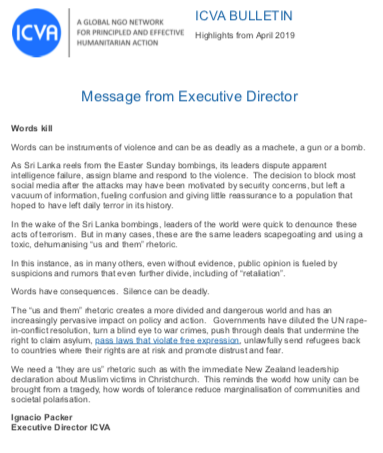 Read the highlights on ICVA activities for the month of June 2020!

Read the highlights on ICVA activities for the month of May 2020!

Read the highlights on ICVA activities for the month of April 2020!